The safety car distance refers to the safety distance of the vehicle you drive from the car in front of you or the safety distance behind the car, so as to avoid accidents and you can avoid it in time. According to the provisions of the "Road Traffic Safety Law of the People's Republic of China", when a motorized vehicle is driving on a highway, the vehicle speed exceeds 100 kilometers per hour, the safety car distance is 100 meters or more; the minimum safety is less than 100 kilometers per hour. The distance between cars should not be less than 50 meters.

I am also a newcomer to driving. When I am in the same line, on a narrow road or when the vehicle passes by, I always feel very nervous. I can't judge my safe driving distance and my distance from other vehicles. In the driving, how can we determine the trajectory of the left and right wheels? Judging the distance from the car is good for the drivers to easily avoid the bumps on the road and reduce the bumpiness of the vehicle. It is also possible to avoid cross-line driving or compaction in driving, to prevent traffic violations or scraping accidents. 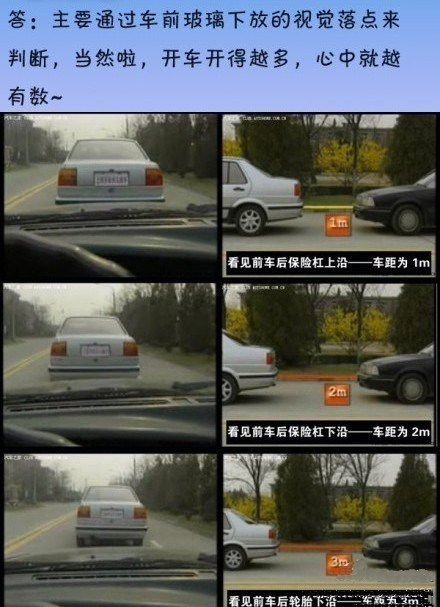 Concerning the problem of concurrent overtaking, at this time, you need to observe the distance between you and the rear car, and safety in order to avoid accidents. When you are on the line, you should observe the rearview mirror. When the vehicle covers the entire rearview mirror, it proves that the car behind you is away from you. Very close, it is not recommended to be in line. If the rear vehicle accounts for 1/2 or 1/3 of the rearview mirror, it can be paralleled. Obviously, you should also pay attention to whether the following car also has the rhythm to speed up the line.

There will be a red light parking during driving. It is necessary to pay attention to the distance between you and the vehicle in front. Take the bumper as the target. When you cannot see the front bumper, you cannot move forward. Live in the car. Of course, it is not recommended to be so close. Taking care of things such as slipping, it is not easy to control.

When parking by the side, it is necessary to pay attention to how to ensure that the right side of the parking, will not be far from the roadside, it will not pressure to the road. This is also difficult to master. Observe the distance between the vehicle and the roadside through the rear-view mirror so as not to press on the shoulder or to stop the wheel from scratching the wheel. By mastering these aspects, you can rest assured that you are on your way.

"Gravity Die Casting. A permanent mould casting process, where the molten metal is poured from a vessle of ladle into the mould, and cavity fills with no force other than gravity, in a similar manner to the production of sand castings, although filling cn be controlled by tilting the die."

The process differs from HPDC in that Gravity- rather than high pressure- is used to fill the mould with the liquid alloy.

There are three key stages in the process.